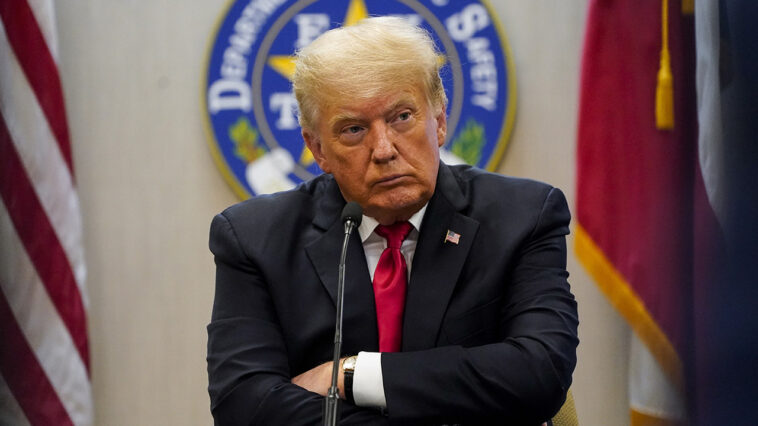 Former President Donald Trump attends a briefing with state officials and law enforcement at the Weslaco Department of Public Safety DPS Headquarters before touring the US-Mexico border wall on Wednesday, June 30, 2021 in Weslaco, Texas. Trump was invited to South Texas by Gov. Greg Abbott, who has taken up Trump's immigration mantle by vowing to continue building the border wall. (Jabin Botsford/The Washington Post via AP, Pool)

Center:
Former President Trump suggested we paint our jets with Chinese flags and then bomb the “sh*t” out of Russia.

Speaking before Republican National Committee donors at a retreat in New Orleans, Trump said the U.S. should blame China for the offensive and then watch as the two countries engage in a conflict.

“And then we say, ‘China did it,'” Trump said, to a room full of laughter. “Then they start fighting with each other, and we sit back and watch.”

It was just last month that Trump, as Russia began its invasion of Ukraine, received criticism from both Democrats and some Republicans for calling Russian President Putin“smart and pretty savvy”. Senate Minority leader Mitch McConnell called Trump’s comments wrong and not supportive of the US’s commitment to Ukraine and NATO countries.

Trump, speaking to the Republicans at the RNC event in New Orleans called Biden “stupid” and “weak” and guaranteed that China would soon take advantage of the his “weakness” by invading Taiwan.

Left:
Russian oligarchs are leftovers from the break-up and have for years maintained a relationship with Trump and his businesses. The current political situation in Russia benefits Trump and makes him even more dangerous now.

Right: Ukraine is not an American ally or a member of Nato. We should not interfere militarily and sanctions should not be so severe as to cripple the world economy.